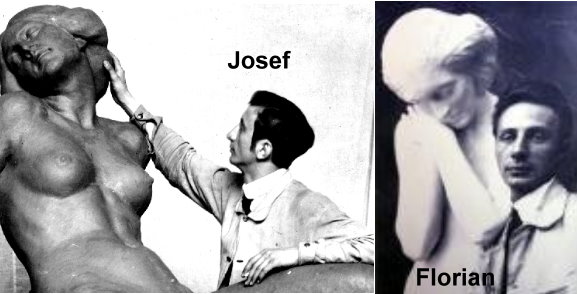 This section will post advancements on my effort to publish the biography of Josephu, titled Brothers in Stone.  The book will refer to this blog page for amendments, and may include a copy of the documentary on DVD (when completed).

Brothers in Stone will be an illustrated biography on the life and works of Josef and Florian Josephu, brothers, sculptors and rivals. Both born and trained in Vienna; Josef left for the US in 1939 never to return. Florian left for Croatia, then returned to Vienna in 1947. The two are often confused because they studied at the same schools, often with the same teachers, both married in 1918 to women, who were both named Olga. The book will have biographical information, photos of their artistic works, family photos. There will also be entries about who their teachers were, who some of their famous subjects were, and will include information about Vienna during the brothers’ most prolific times (1900-1939).

I’m very pleased the Anne-Marie O’Connor, author of the wonderful book The Lady in Gold, which chronicles the life of Gustav Klimt, the Bloch-Bauer family, and Klimt’s most famous work, the portrait of Adele Bloch-Bauer, has agreed to write the forward to my Brothers in Stone.. Her work inspired the film Woman in Gold, and through Anne-Marie I was able to meet Gustav Zimmerman, Klimt’s grandson. Not only is Anne-Marie supportive, but happy to answer any of my inquiries. For example, on my most recent trip I visit the Bloch-Bauer home and was intrigued about how close it was to where my grandfather studied, at the Vienna Academy of Fine Arts. From messaging on my phone while standing there, I queried Anne-Marie if there could be a  possibility that my grandfather met the Block-Bauer. She responded immediately “most likely.” The art world was very small back then. We have ascertained that my grandfather, and his brother, were related through a marriage to Ivan Mestrovic, a member of the Secession. Ivan’s wife, Ruja designed hats for Emilie Flöge…the Secession House is located immediately behind the Academy. The Bloch-Bauers were great supporters of the arts. The Josephu brothers studied at the same time, and were part of a circle of friends. The likelihood of them meeting is extremely probable.  I am humbled my Anne-Marie’s friendship.